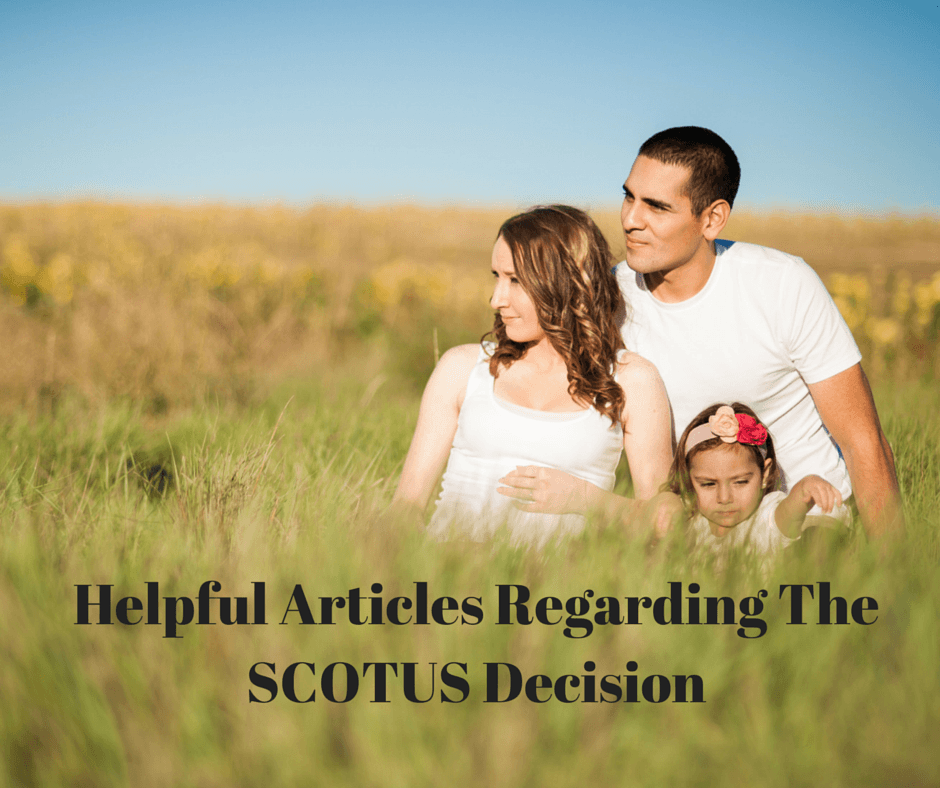 Helpful Articles Regarding The SCOTUS Decision

Last week the Supreme Court of America ruled in favor of same sex marriage. As a follower of Christ this brings up many thoughts. But while studying and looking through the issue I have found several articles that has helped me think through this. So I am posting many of these articles here in order to help you as you study. This might help you in your own parenting, in life or ministry. I pray that this will help equip you.

Below are the titles and the links below. I have kept the links long in order for you to see what the links are. I have carefully read and watched everything that is below. And that took a while. I think this well worth your time and at the very least might give you some food for thought whether you agree or not. Some of these I do not agree with all but it has made me think. Enjoy these links.

Parenting in a Gay Marriage World: What Should Christian Parents Do? http://cbmw.org/public-square/parenting-in-a-gay-marriage-world-what-should-christians-parents-do/

How Should You Talk to Your Children About Same-Sex Marriage?http://www.russellmoore.com/2015/06/29/how-should-you-talk-to-your-children-about-same-sex-marriage/

Talking to your children about sex, marriage and same-sex marriage. http://erlc.com/article/talking-to-your-children-about-sex-marriage-and-same-sex-marriage

Some Church Leaders Response to this decision.

Christians React to the Legalization of Same-Sex Marriage: 9 Key Findings: This is from Barna Group. https://www.barna.org/barna-update/culture/723-christians-react-to-the-legalization-of-same-sex-marriage-9-key-findings#.VZVTCWDVl5M

Thoughts about this topic from a pastor in Canada. http://careynieuwhof.com/2015/06/some-advice-on-same-sex-marriage-for-us-church-leaders-from-a-canadian/?

Ed Stetzer who is in charge of research at LifeWay wrote this: http://www.christianitytoday.com/edstetzer/2015/june/same-sex-marriage-is-legal-what-now.html

Why the church should neither cave nor panic about the decision on gay marriage : http://www.washingtonpost.com/news/acts-of-faith/wp/2015/06/26/why-the-church-should-neither-cave-nor-panic-about-the-decision-on-gay-marriage/

This is a follow up article to the one above: http://erlc.com/erlc/herewestand

A Great Thought About discussing the SCOTUS Decision with others. http://www.scissortailsilk.com/2015/06/28/the-day-that-love-won-a-response-to-the-supreme-courts-ruling/

Sanity, the Supreme Court, & Same-Sex Marriage By JR Lee. This is from a pastor to his church. He brings up some good points. http://jrlee.tv/2015/07/01/sanity-the-supreme-court-same-sex-marriage/

New Movie about having a loving Gospel centered conversation on the topic of LGBT: http://www.audacitymovie.com

A Biblical Response to Homosexuality from John MacArthur: This is a compilation of some biblical articles going deeper into this issue. http://www.tms.edu/preachersandpreaching/a-biblical-response-to-homosexuality/

This is a video for thought by the Center for Parent/Youth Understanding. CPYU’s video of Wesley Hill. http://www.cpyu.org/2015/06/15/wesley-hill-framing-conversations-on-same-sex-attraction-and-sexuality/

What links would you add to this list that has been helpful?